“My heart,” writes Jared Wilson in The Imperfect Disciple, “is a haunted house – broken, ramshackle, weathered and boarded-up and filled with the mournful sound of the Hound of Heaven howling through the slats” (p. 22). Wilson wanted to write a book on discipleship that didn’t cast its readers into a spiral of guilt and frustration, and so, along with stories of his own failures and struggles, he welcomes us to explore “grace for people who can’t get their act together.”

The book is replete with echoes of Chuck’s sermon series on messy Christianity. That’s unsurprising since both draw on the same gospel: Jesus Christ came to save the lost, heal the sick, raise the dead, to feed the hungry, forgive the sinful. He’s not here for people “who have their act together” and feel like they can get along on their own (Mark 10:45; Luke 5:32; John 6:51; 1 Timothy 1:15; etc.). 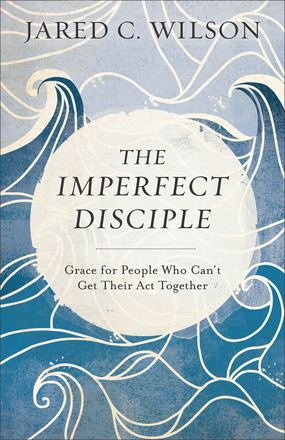 “It turns out—and you need to read this closely, so I hereby advise you to actually pull this book closer to your face and get the following words right in front of your milky little corneas . . . well, not that close; you look like a weirdo. Hold it up. Read it close. Drink it deep. It turns out, actually, that—get this—Jesus is looking specifically for the people who can’t get their act together. I know, right? I swear I am not making this up!” (p. 24-25). Throughout the book, Wilson relies on Scripture to establish that he isn’t, in fact, making that up. God’s strength is greater than our weakness; God’s faithfulness is greater than our faithlessness; God’s love is greater than our apathy.

Wilson weaves gospel truth with sometimes heartwarming/sometimes heart unsettling stories across ten chapters, displaying a rainbow of emotions and practices. One color, though, keeps showing up time and again: the red blood of Jesus. Wilson admits that there is some of his blood in this book too. Not that his blood is at all effective in saving himself (he can’t get his act together, remember?) But so it is with discipleship. We’re saved by the blood of Christ, and at the same time, his call to bear our own cross in following him is a call to shed our own blood, too – certainly metaphorically and sometimes literally.

Discipleship is rarely a momentary decision, though. What will you do if someone threatens your life – will you confess or deny Christ? Christians in some places and times have had to make that decision. More often, at least for me and other disciples who can’t get their act together, discipleship “isn’t just following Jesus, but refollowing Jesus every day” (p. 27). It is tracking with Jesus, sometimes complaining, “Are we there yet?” through the ordinary rhythms he’s set out in his Word and in community with one another, in all the mundane curvatures of our lives. Will I confess or deny Christ when it comes time to… do the dishes? To change diapers? To be patient with the traffic? To talk to my neighbor?

With his eyes on Christ, Wilson leads the reader through chapters on our sin and fallibility, onward to chapters on Bible study and prayer, emphasizing the importance of community and grace. He always has his gospel drum close at hand, which he continually beats over the syncopated rhythms of his doubts, fears, and anxieties. In so doing, he sets an example for all of us: preach the gospel to ourselves and to one another, honing gospel reflexes, as Paul exhorts us to do in Philippians 4:8: “…whatever is true, whatever is honorable, whatever is just, whatever is pure, whatever is lovely, whatever is commendable, if there is any excellence, if there is anything worthy of praise, think about these things.”

Just know we’re going to screw it up.

And then know that Jesus has got us.

Two things happened in the middle of medical school that propelled Josh on his present, never-ending adventure: he came to faith in Christ and he married his wife, Amanda. They now live in Durham as they raise three children together and as he works as an internist and psychiatrist trained in hospice and palliative medicine. In addition to general issues of pastoral care, he loves thinking critically (and hopefully helpfully) at the intersections of faith, medicine, and ethics.