The Old Testament can be intimidating. Unpronounceable names. Long lists of places. Hundreds of laws. Sometimes confusing stories. Prophets. Priests. Kings. An angry God? In the history of the Church, some wanted to throw out the Old Testament because it didn’t seem to depict the same loving God of the Gospels and the rest of the New Testament. Do we treat the Old Testament, at least functionally, the same way? How can we understand it? Where do we even begin?

I remember in college when I began to understand for the first time the way the Bible holds together as one consistent story, from the first pages of Genesis to the last pages of Revelation, starting in a beautiful garden and ending in a garden city. The common thread of that beginning and ending is that God is there, living with and loving his people. One of the great arguments for the truth and reliability of the Bible is that the story holds together at all. Written over thousands of years in a multitude of genres (poetry, narrative, biography, prophecy, personal letters), by diverse people living in different places – yet it all holds together. My faith has been consistently strengthened by reflecting on the fact that this is impossible unless the Bible only has one ultimate author – God himself.

But if God holds it all together, then he must hold together too. We can’t avoid the God of the Old Testament and just stick with Jesus and his words to us. What the Bible says on every page, from the easiest to the hardest passages, has something to teach us about the God “with whom there is no variation or shadow due to change” (James 1:17). This is why I love Exodus. It is the story of God’s rescue of his people from slavery so that they might worship him; it is the fulfillment of the promise of his presence with them in the midst of difficult circumstances; it is a clear depiction of the path to freedom through the sacrifice of another. These themes run throughout the rest of Scripture, popping up again and again as compelling evidence that the Bible is one consistent story about one consistent hero: Jesus, who was sent to rescue a people from slavery to sin and death so that they might worship the one true God, whose life, death, and resurrection secured for all time God’s presence with his people, whose sacrifice paved the way to true gospel freedom.

I recently led a small group for students at Duke about the storyline of the Bible, and they noted that it took us weeks to even get out of the Book of Exodus. In studying Exodus, we have an opportunity to spend weeks in the rich, beautiful themes of that book so that we might more fully understand this grand story and its author: “The Lord, the Lord, a God merciful and gracious, slow to anger, and abounding in steadfast love and faithfulness” (Exodus 34:6). May we, as we study this great part of God’s word, grow to more deeply trust our Savior, who is the same on every page of Scripture and “the same yesterday today and forever” (Hebrews 13:8). 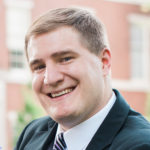 Matt was born and raised in New England, spending most of his childhood years in Massachusetts. He moved to the land of sweet tea, Chick-Fil-A, and college football to attend college at Vanderbilt University in Nashville, TN, where he was deeply impacted by the ministry of RUF. In college, he met his wife, Bethany, to whom he has been married for 9 years. He has a highly extroverted and fun 3 year-old son, Vance, and a happy, sweet 1 year-old daughter, Elise. Matt loves exploring new places with his family, playing golf, spending way too much time being disappointed by Vanderbilt sports, cooking (and eating), and hanging out with people.

Previous
Vacation Bible School and Childhood Wonder
Next
What Is the Worth of Our Religion?