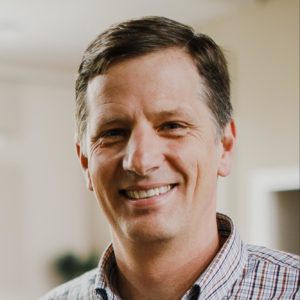 Chris Garrett is from St. Louis, but attended UNC before joining the college ministry staff of Campus Crusade for Christ (CRU) for five years after college. He attended Gordon-Conwell Seminary in Boston. He and his wife Jenny  both received their degrees there, and they returned to serve at CGS when Chris accepted the position of Youth Pastor.  Following a missions call, Chris and Jenny served with MTW in the Philippines for 4 years, and then returned to States where Chris was the founding director of the Samaritan Health Center in Durham. Since 2012, Chris has been serving as a pastor at CGS and focuses on the areas of local outreach, global outreach and congregational care.

Jenny hails from Houston, Texas where she learned early on to love all things outdoors. Following college at Sewanee and teaching middle school, she started a youth ministry program in Atlanta. Jenny met Chris when they were both at Gordon-Conwell in Boston studying for their Masters of Divinity. She currently serves the Lord by teaching 6th grade at a local school.

The Garretts have four kids (Caroline, John, Christopher, and Brooke), and enjoy all manner of community, outdoor sports, and outings. You likely might find them on the American Tobacco Trail or on the tennis courts on the weekend.